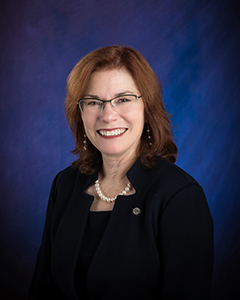 "As New Mexico’s flagship university, we are in the unique position to make an impact statewide. I am enthusiastic about finding new ways to enrich the lives of our students, faculty, alumni, and staff while continuing to be the University for New Mexico."

Garnett S. Stokes was installed as the 23rd president of The University of New Mexico on May 12, 2018. She is the first woman to hold the post in the university’s 132-year history.

A tireless advocate for a transformative student experience, an empowered faculty, and a campus culture of continuous improvement, Stokes brings to New Mexico’s premiere R1 university more than four decades of experience and enthusiasm—as well as the unflagging energy needed to ensure The University of New Mexico thrives as a great place to work, live, and learn.

Shortly after taking office in 2018, Stokes journeyed on an unprecedented statewide “listening tour,” covering 4,300 miles as she travelled through all 33 of New Mexico’s diverse counties. Her meetings with thousands of New Mexicans—hearing their stories, and learning of their hopes and expectations—helped frame her immediate presidential priorities of promoting campus safety, supporting student veterans, and advancing the University’s mission of world-class research. Stokes continues to hold regular office hours, routinely engaging with faculty, staff, and students for their input and commentary.

Under Stokes’s leadership, UNM has embarked on a journey of academic excellence, self-reflection, and collaborative problem-solving to identify effective ways to make the University of New Mexico a better and more engaging place to learn, work, and live. Since her arrival, UNM has received the Carnegie Community Engagement Classification, a designation that indicates institutional commitment to community engagement, and one of only 119 institutions to earn such a designation. UNM is also among the highest number of Fulbright awardees in the country..

As president, Stokes has worked tirelessly to seamlessly coordinate UNM’s core missions of conducting top-tier research, compassionate and quality health care and health services, and providing access to a quality education for one of the most diverse student populations in the nation. She has made it a priority to promote and support collaborative efforts of the UNM community that benefit the entire State of New Mexico. In collaboration with the Board of Regents, she continues to strengthen relationships with key stakeholders to advance UNM’s mission.

In February 2019, Stokes announced the UNM Grand Challenges, calling on researchers across disciplines to address problems of global, national and regional significance. After receiving proposals from research teams across UNM’s campuses, Stokes chose to focus on three key areas as part of the newly-established UNM Grand Challenges: Sustainable Water Resources, Successful Aging, and Substance Use Disorders. She charged researchers with developing goals that enable multiple paths towards solutions and that are relevant across varied disciplines and communities. Since 2019, Grand Challenges teams have generated more than $20 million in funding, and continue to implement education and community outreach events and initiatives to improve lives around the State of New Mexico.

Prior to her arrival at UNM, Stokes served as interim chancellor, provost and executive vice chancellor for academic affairs at the University of Missouri, and was provost and executive vice president for academic affairs and interim president at Florida State University. She has also been a faculty member, chair of the department of psychology, and dean of the Franklin College of Arts and Sciences at the University of Georgia

A first-generation college graduate, Stokes earned her B.A. in psychology from Carson-Newman College in Jefferson City, Tennessee, and M.S. and Ph.D. degrees from the University of Georgia in industrial/organizational psychology. For nearly three decades, she served as a professor in the psychology department at the University of Georgia, including seven years as dean of UGA’s Franklin College of Arts and Sciences.

Her husband, Dr. Jeff Younggren, is a forensic psychologist and a retired Colonel in the U.S. Army. They have two children and four grandchildren. President Stokes and Dr. Younggren reside on campus at University House.